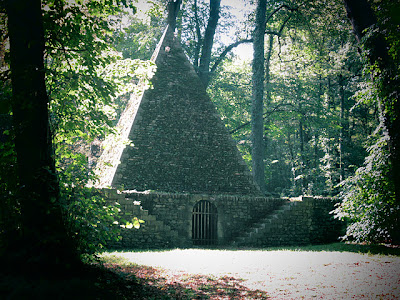 I have been intrigued by Le Désert de Retz, a late 18th century French folly garden in the suburbs of Paris, since I bought Diana's Ketcham's excellent book, Le Désert de Retz, around 1994. As she wrote, "Twelve miles from the heart of Paris, one of the glories of the architecture of fantasy has lain forgotten for two hundred years. The Désert de Retz was built as the private pleasure garden of Francois Nicolas Henri Racine de Monville, a gentleman of fashion during the reigns of Louis XV and Louis XVI."

Within the almost 50 acres of the garden, Monsieur Monville created a fantasy world of 17 buildings called follies in styles such as classical, oriental, Egyptian and Gothic. A folly is simply a small, ornamental building with no earthly practicality, created for the pure joy and "folly" of it. Think of them as the playhouses for the 18th century's 1%. 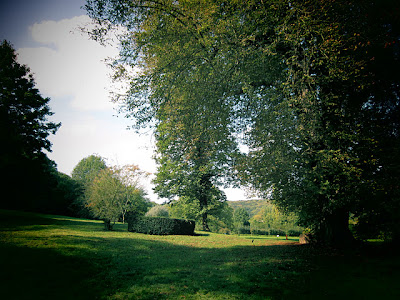 When planning my recent trip to France, I was delighted to find that there would be a concert and tour of the Désert while I was in Paris. I ordered tickets. We hired a mini-van and chauffeur for the one-hour drive to Chambourcy, where the garden is situated.  The garden is now owned by the municipality of Chambourcy and is slowly being restored. 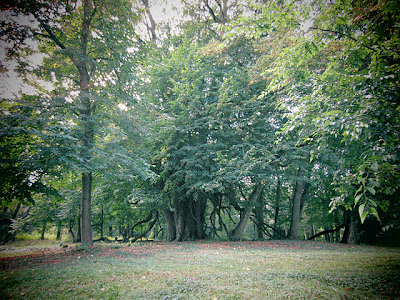 The property has magnificent specimens of rare trees from all over the globe. 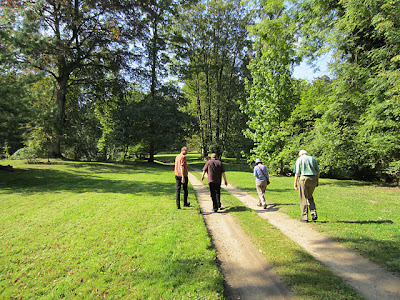 When we are arrived at the Désert, in spite of following the posted signs to the concert, we entered at the wrong gate. The president of the Association Le Désert de Retz loudly chastised us for this misdemeanor and told our driver he couldn't park there. It was all very convoluted (the yelling being done in French) but there was, apparently, a parking lot and entrance where we were supposed to have gone. Our driver, a very nice fellow, went off to search for mushrooms until he could pick us up at 5:30 p.m. When the tour started, this gate was locked! 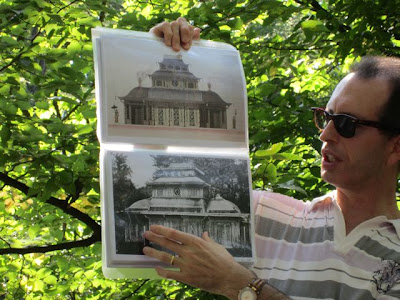 Our guide, Laurent Fourquié, an expert on the Désert, began the tour by speaking about La Maison Chinoise (Chinese House). Sadly, this folly collapsed due to neglect but will be rebuilt when funds are available. 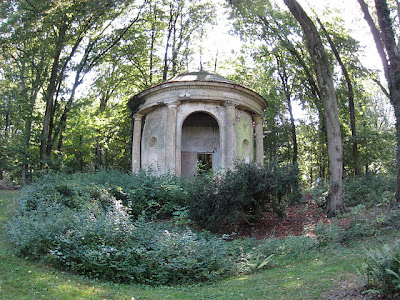 Ah -- the site of the unfortunate incident. Pan was being mischievous. A few of us (including French people), began to wander away from the guide. Some French people actually went up behind the temple. I did not. However, when the president of the Association saw us up there, he started to yell (in English) "You can't go up there!" He hurriedly came up the hill to the Temple, while the French people scurried away. As I was attempting to extricate myself from this situation and descend the hill, I slipped on an acorn (probably a Scrat reject) and fell. When I saw my left foot bent under my body at a very sharp angle, I knew this could not be good. I limped off to sit in the shade and lick my wound. 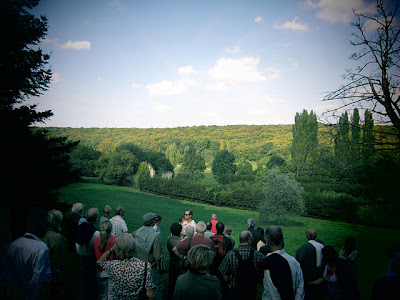 In 1786, Thomas Jerfferson, with his girlfriend, the painter, Maria Cosway, visited the Désert. Diana Ketcham set the stage: "After the viewing, what would M. de Monville have offered as refreshment? Perhaps tea in the Chinese pavilion, served from his collection of antique porcelain. If the day was hot, a servant may have rushed over from the Pyramid bearing ice for their drinks." 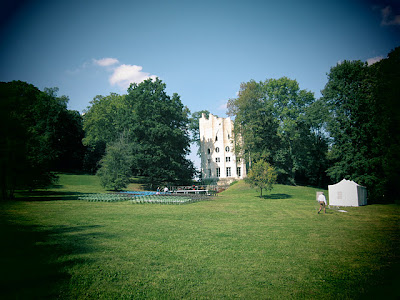 A distant view of the Le Colonne Détruite (the Broken Column.)  Some people say that Thomas Jefferson broke his wrist while trying to impress Maria Cosway by jumping over a fence at the Désert. Jackie Kennedy also visited the Désert in 1979. 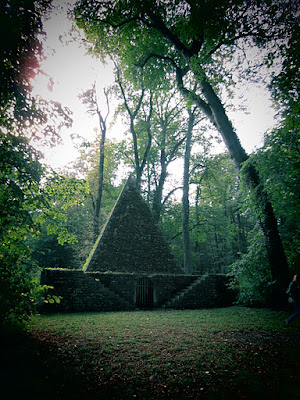 Another view of the Pyramid Ice House. In the 1940's, André Breton and some surrealists sneaked in to the Désert to enjoy the ruins and decay. 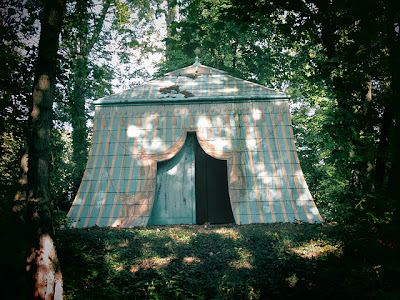 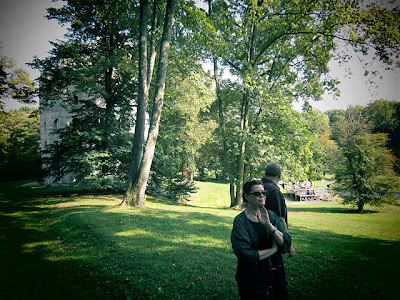 Dianna Ketcham wrote: "The Castle of Sleeping Beauty, the secret garden, the place time forgot -- such were the story-book images the Désert could evoke for the literary minded." 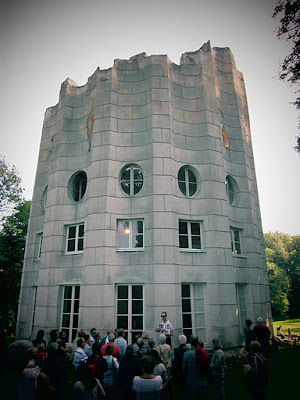 The tour behind the Broken Column. The word Désert is used to connote an isolated, rarely frequented and deserted place. 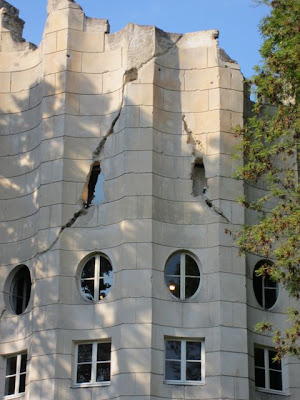 A close up of the Broken Column. Yes, it was designed with the cracks. A family actually lived in the Column in the early 20th century. New windows have recently been installed. 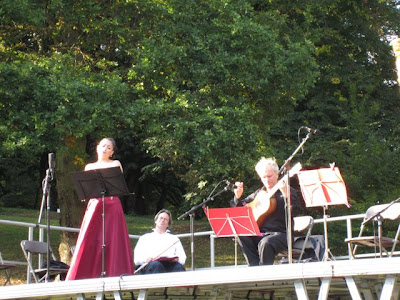 The Concert des Lumières, featuring 18th century Baroque music, took place after the tour. As I sat in the shade with an ice pack on my ankle, the lovely music floated over the lawn. People were quite solicitous and kind to me. At 5 p.m., our little group got up to walk down the road to where our chauffeur would meet us. I was supported by my stepson, Richard, and Dianna's husband, Michael. Dianna walked ahead, and when we were almost to the gate, she came back with the bad news. The gate was locked.

Just at that moment, Pierre Morange, the mayor of Chambourcy, drove up and unlocked the gate. And guess what? Le maire est aussi médecin. (The mayor is also a doctor.) He looked at my ankle, by now swollen and black and blue, and declared it was imperative that I go to the hospital. He called our van driver to come and pick us up, called La Police Nationale to escort us to the emergency room and lifted me in to the van! You may see Dr. Morange here. Merci, Docteur Morange!

And that is how I came to visit Centre Hospitalier Intercommunal Poissy St-Germain en Laye. X-ray, normal. Conclusion: entorse benigne de cheville (sprained ankle). Our chauffeur waited for the two hours that I was in the emergency room. Maybe he was smoking some mushrooms. We gave him a good tip.

I was so taken with the Désert, that in 1999, I did a painting using it as a background for A Folly Wedding. 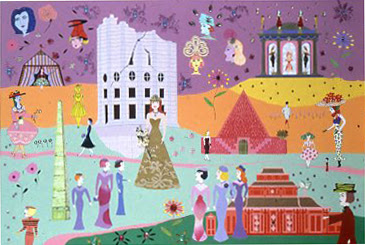 A Folly Wedding by Carol Markel

A very nice man named Ronald Kenyon runs a website on the Désert. You can access it here.

A note to my readers: Why not follow my posts by email and receive Femme et Fleur posts as they fly hot off the keyboard? Simply click on the email subscription box in the sidebar, and you will receive only new posts as I post them. Isn't that convenient?


Thank you to Dianna Cramer for allowing me to use the wonderful photos in this post.

Carol Markel
I'm an artist and milliner living in New York City. I study French, travel and adore la mode. I like to toss bons mots, maintain my credentials as a culture vulture and make ironic comments. Photo by Ari Seth Cohen of Advanced Style.