Thursdays are for Uptown

Swept Away in a Spiritual Spaceship
at the Jewish Museum
Thursdays are my day for French lessons at the French Institute/Alliance Française on 60th Street. On this particular Thursday, I had multiple events planned. French, then lunch with Richard and a friend, followed by a trip to The Jewish Museum to see a special fashion show with friends Maryann and Ari Seth Cohen. A whole day away from the Lower East Side. Ahh ... I am Uptown. 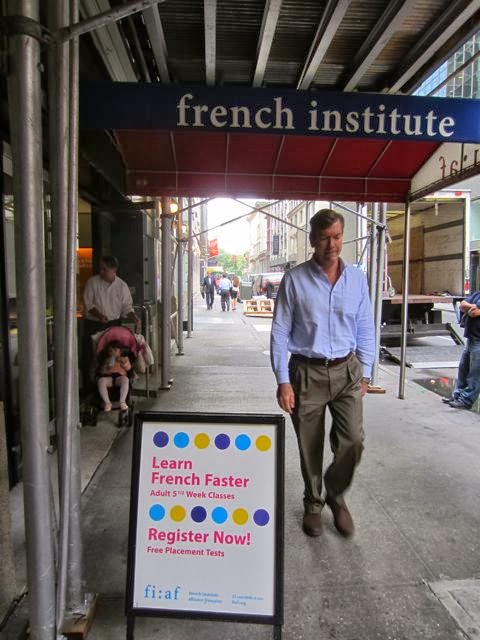 I have a French lesson with Professeure Samira Ait-Jafour
from 10 to 11:30. 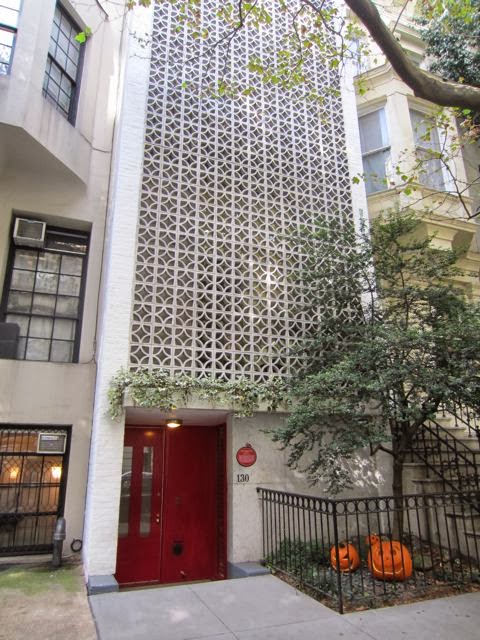 After my lesson, I walk along 64th Street on my way to meet Richard and our friend, Liz, for lunch at JoJo -- a chic little restaurant in a charming townhouse. On the way I pass this eye-catching house designed and lived in by Edward Durell Stone, architect of the Museum of Modern Art. 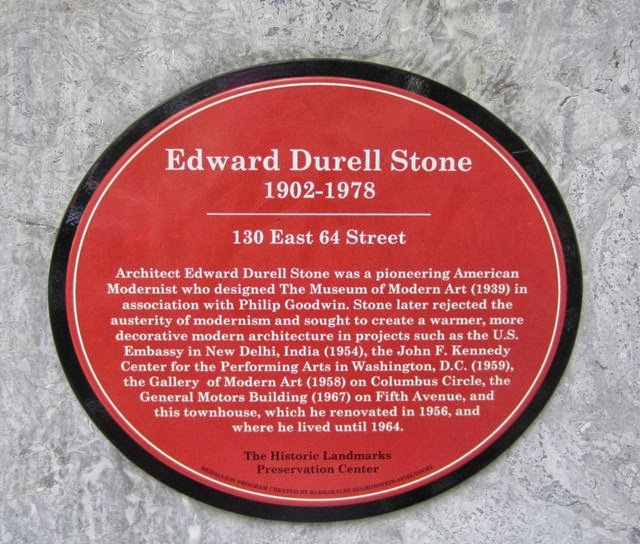 Lovely plantings are a signature of the Upper East Side.
These reflect the circles in the Durell Stone house. 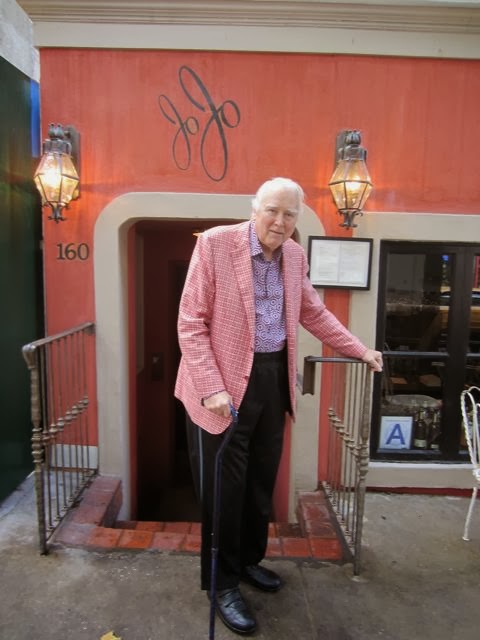 Arriving at JoJo, who should I encounter
but un homme qui porte une veste rose. 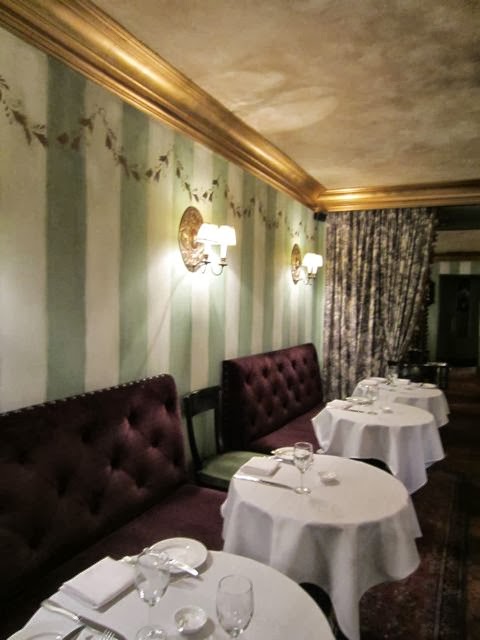 JoJo is so pretty with it's deep purple banquettes and toile curtains.
This Jean-Georges Vongerichten restaurant was his first in New York
and has been open for 22 years. 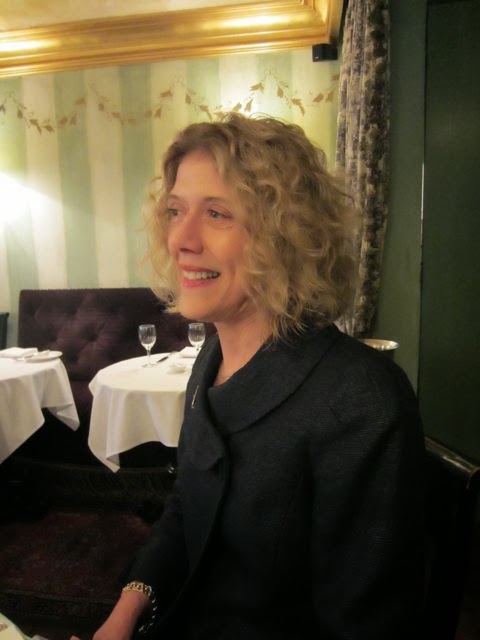 Liz works nearby at the Memorial
Sloan Kettering Cancer Center.
Lunch was delicious, if a bit rushed for Liz, whose
high-powered job does not leave her much time to be
a lady who lunches. 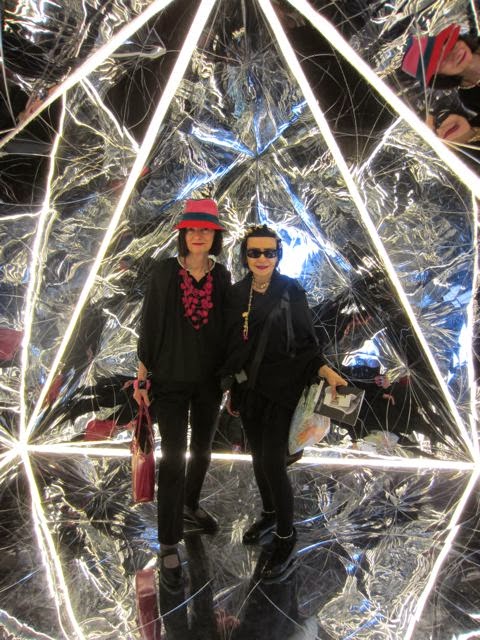 Our next stop was The Jewish Museum on 92nd Street where there is an exhibit of the clothes of threeASFOUR, an avant-garde fashion team. The gallery space has been transformed into an inky black room with animations of the team's intricate designs projected on walls. They also created a Temple of Mirrors in a flower-of-life pattern in which I posed with Maryann. 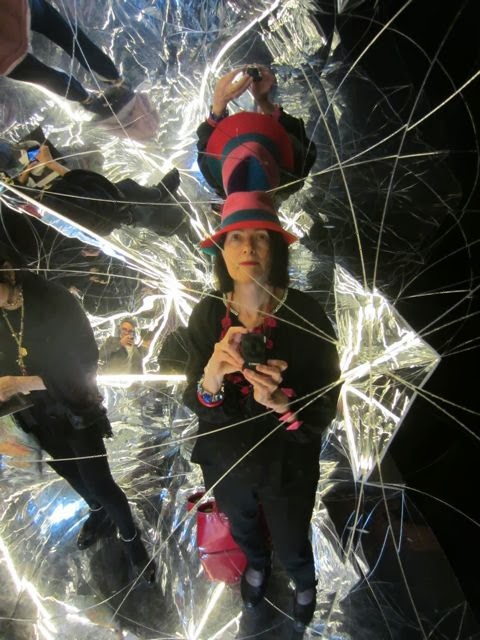 My Lola fedora does double duty reflected on the mirrored wall. 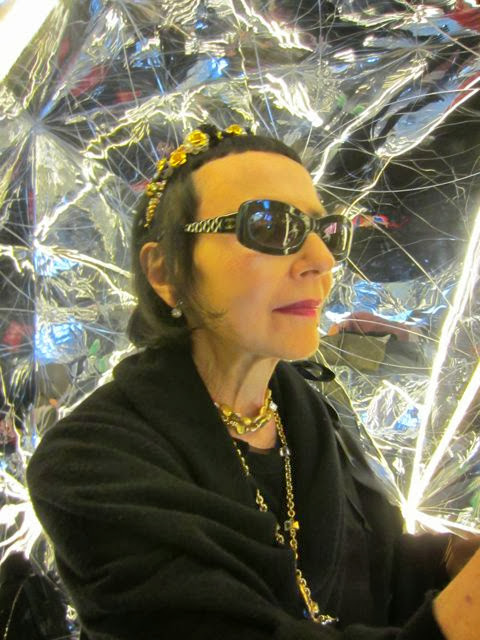 threeASFOUR used the concept of MER KA BA as the theme for their collection and the exhibition design. The clothing line is inspired by sacred geometry and tile patterns found in churches, synagogues and mosques throughout the world. Hence, their presence at The Jewish Museum. 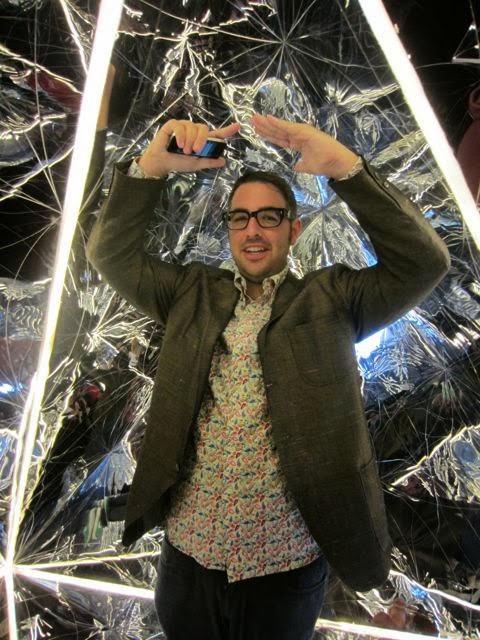 Ari Seth Cohen, author, photographer and creator
of the Advanced Style book and blog, joined us for the exhibit.
He was inspired to ascend in the Temple of Mirrors. 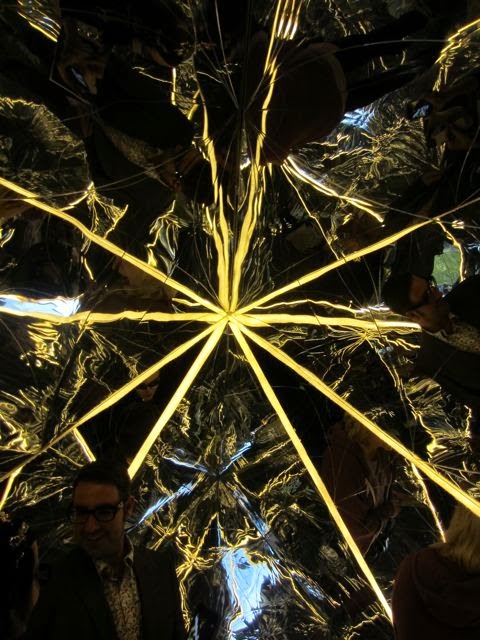 The design team of threeASFOUR is composed of three people.
Gabriel Asfour is from Lebanon, Adi Gil is from Israel and
Angela Donhauser is from Tajikistan. 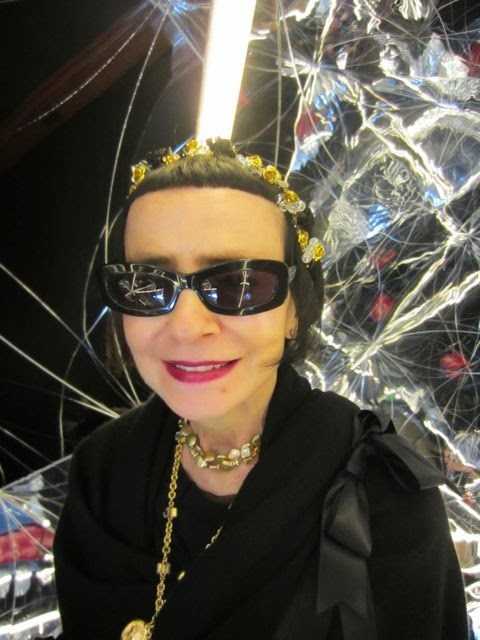 Maryann designed her headband and jewelry. She looks
fantastic reflected in the Temple's mirrors. 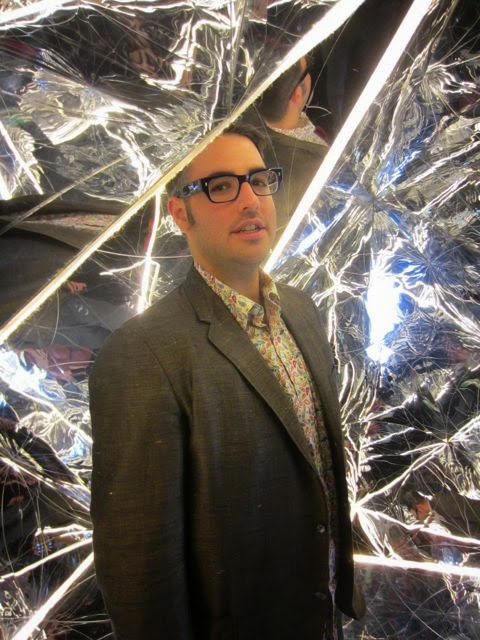 Ari in the Temple.
Merkaba is a mystical form of Judaism,
and alludes to ka ba, a holy site in Islam. Taking a selfie in the Temple. 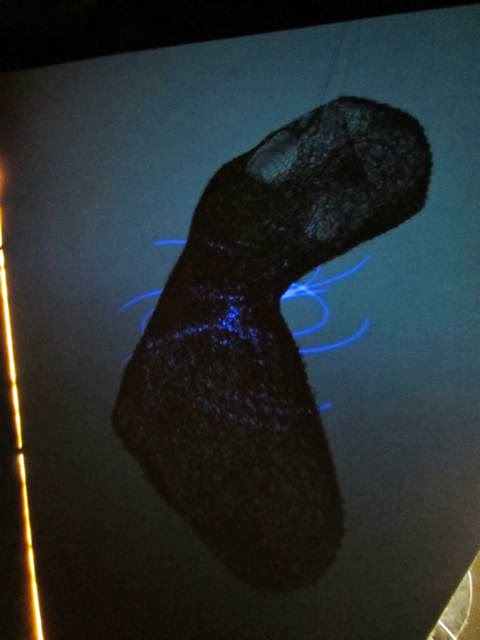 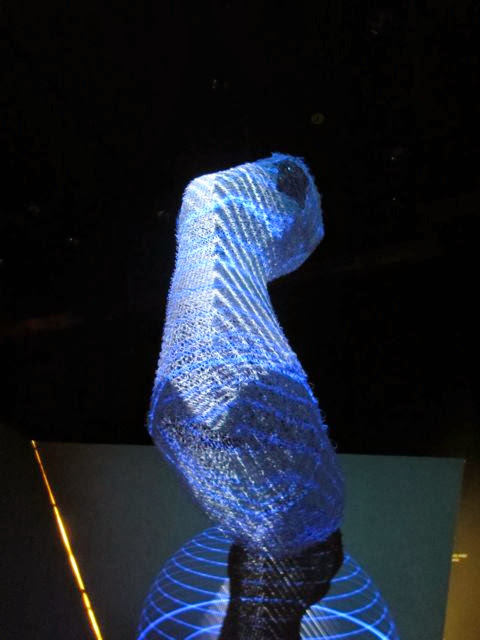 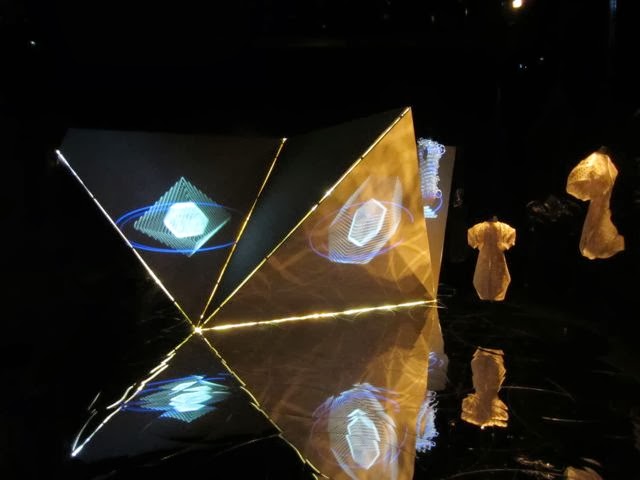 Dresses as Lost Souls in the Solar System. 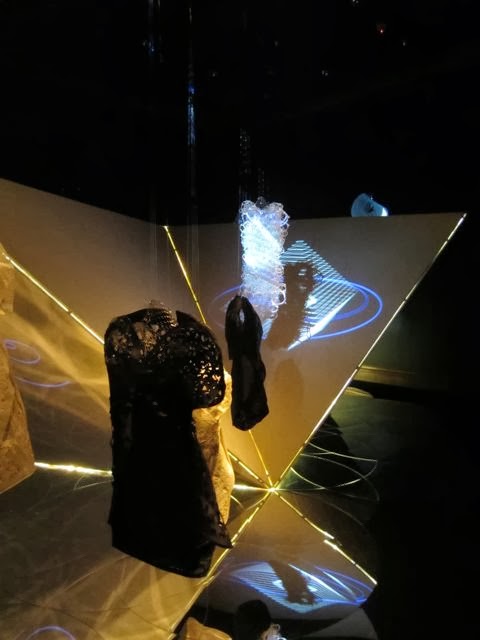 Many of the dresses use lace made of laser-cut leather. 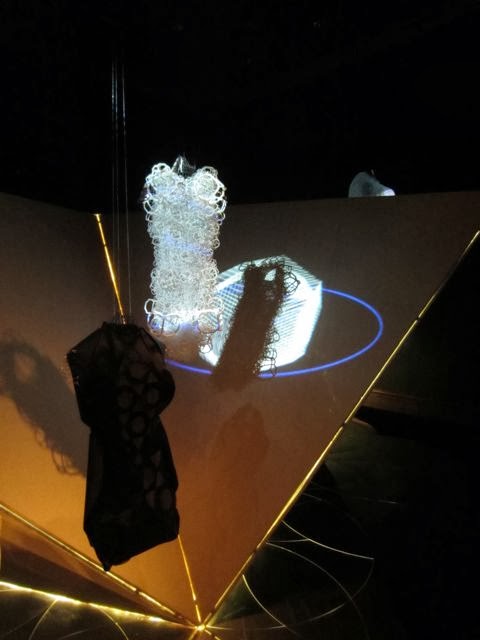 A planetarium with dresses as the stars. 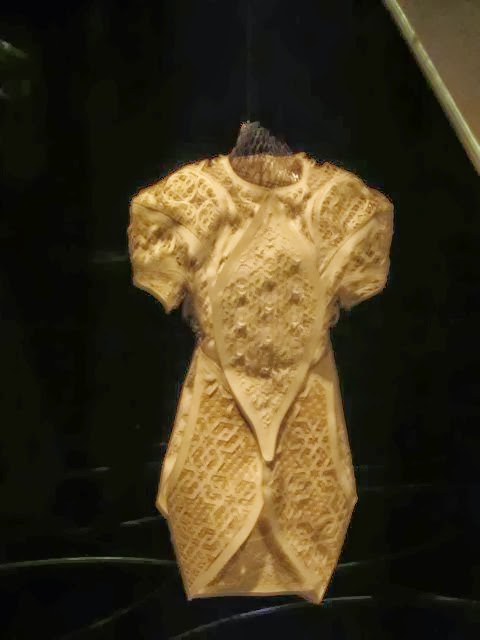 This would make an interesting
dress for a Sci-Fi Bride. 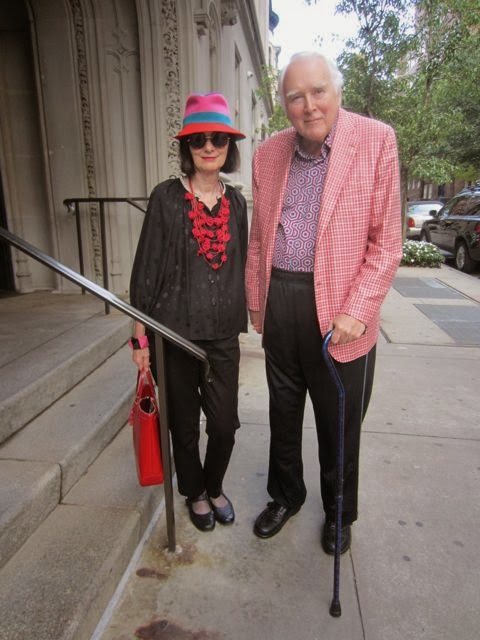 Outside the museum, Ari took our picture. 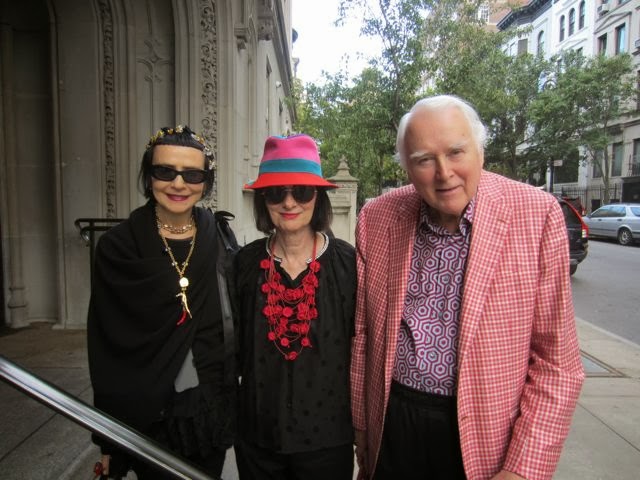 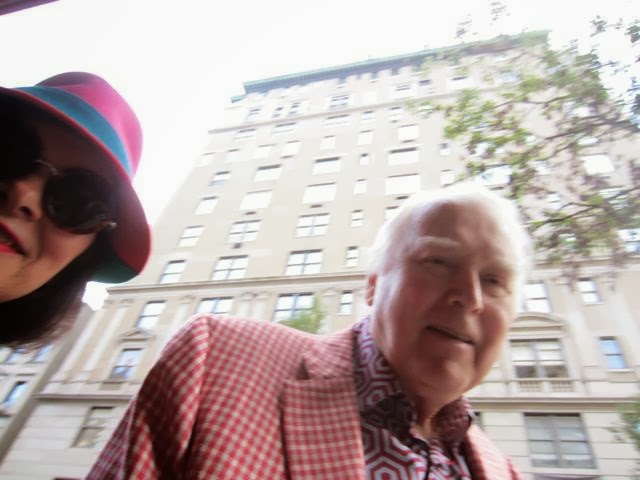 Getting a cab on Fifth Avenue.
Wonderful day!